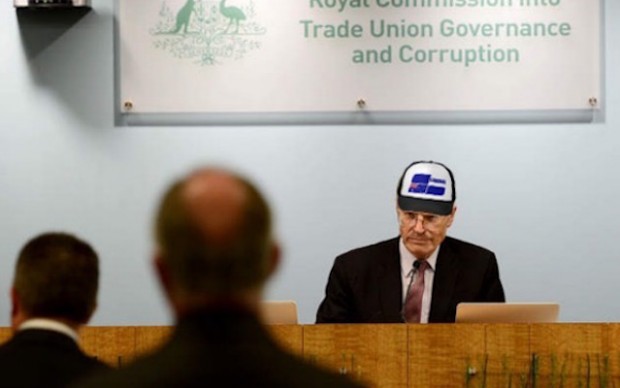 “I overlooked the connection between the logo on the cap and the Liberal Party of Australia,” Mr Heydon said in a statement today.

Liberal Party MPs, including Attorney General George Brandis, have come out in support of Mr Heydon, saying there is no suggestion of bias. “It is just a hat. He took it off as soon as he was made aware of it; that should be the end of it,” Mr Brandis said.

Former Speaker Bronwyn Bishop said it was a trivial matter and nothing more than a witch-hunt. “I would often arrive at the Speaker’s chair and accidently start handing out Liberal Party brochures. We’ve all done it! Move on.”

While there is mounting pressure on the Commissioner to resign, Prime Minister Tony Abbott has advised Mr Heydon to let the shitstorm grow for another two or three weeks before finally standing down.