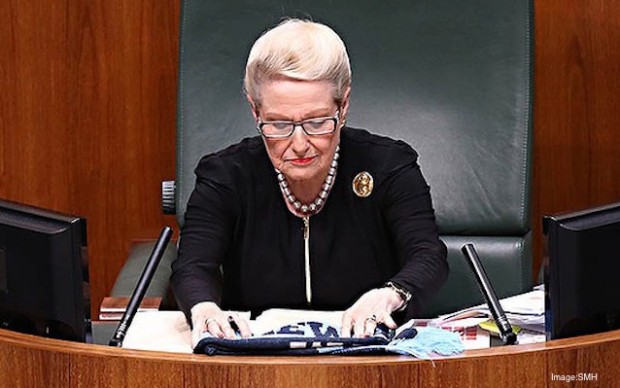 1:00pm Floyd, one of my personal assistants, comes running into my chambers rather frantically, and asks me if I remember taking a helicopter flight from Melbourne to Geelong last year. “Well of course I remember it!” I say. “The seat didn’t recline and they had run out of Dom Perignon. It was something of a nightmare. Certainly not something one forgets quickly”.

Floyd says there may be a problem. Something about an expenses scandal, wall-to-wall coverage all over the press. “The Speaker chartering a helicopter is not a good look ma’am,” he says.

“Was my hair out of place? The gust from those blades can be rather strong,” I say, making a mental note to use stronger hair spray for future chopper flights.

“Not a good look publicly, ma’am. It was only a 75km trip,” he says, looking slightly confused.

“Well yes, that’s the distance between Melbourne and Geelong. I can’t help that. Do people expect me to circle around a few times just to increase the distance?” I say. Actually, that would have allowed me time to finish the personal massage. Not a bad idea for next time.

3:00pm It turns out Floyd was right, my expenses are all over the press. It is quite obscene. Have they not got something better to obsess over? Labor’s debt and deficit disaster perhaps? Where do they find these journalists.

And this fascination with this one particular chopper flight. How on earth is one expected to get from Melbourne to Geelong? By road? Clearly these people have never seen the western suburbs of Melbourne. I have – it’s not pretty, and that’s from a thousand feet up in the air. Who knows what it’s like close up. No doubt full of leeches reliant on Government hand-outs.

9:00am Joe is on the wireless saying that my spending doesn’t pass the ‘sniff test’. This from the man who said poor people don’t drive cars! Which is a silly thing to say. My driver earns just $70,000 per annum, the very definition of poor!

10:00am Tony calls me to say I should pay back the funds for the helicopter ride. I’m not sure if he is serious.

“Bronwyn, you need to make sure that if you’re ever doing a fundraiser, you tie it in with a visit to a hospital or a school, so you can justify it as an expense write-off,” he says.

“A hospital!” I say, disgusted.

“Perhaps a trip to the theatre,” I suggest.

Begrudgingly I make the $5,227 payment to the Finance Department, and ask them to send through the receipt. “Just pop this receipt in with the other claims,” I say to Rupert, one of my other assistants. He seems a little taken aback. “Good god, it’s a two-minute job! I’ll get another assistant to do it if I have to,” I say. Everyone is acting more than a little bit strangely this week.

Anyway, people have to understand that being a Speaker has its costs. Impartiality doesn’t come cheap.

4:00pm Floyd tells me that Labor has referred the matter to the Federal Police. What a stunt. What an ugly, unedifying stunt, to refer someone’s expenses to the police. I paid the funds back the moment Tony said I had to.

10:00am Tony calls again to say that I need to front the press and make an apology. Which I do with dignity. “I am deeply sorry for taking the focus off Bill Shorten and his carbon tax,” I say.

That should be the real story here – Labor and their taxes. Expecting the public to keep paying for their extravagant spending. The fewer people reliant on the Government the better, I say.

9:00am Oh for God’s sake. Now it’s the limousine costs they’re concerned with. What are they going to get their knickers in a twist about tomorrow? The caviar and abalone starter at pre-drinks? All within guidelines, I should have you know.

And this suggestion that I should have used public transport instead of a limousine. Limousines are public transport. Any member of the public is free to pay $1,000 a day to hire one.

5:00pm What a horrific week. I run a bath, then I call Floyd. “Pop down to the shops and buy a bottle of ’94 Krug would you please? Keep the receipt. Oh, and maybe stop by at a hospital on the way back”.