CLOSE
The Nation
Australia Will Run Out Of Flags By 2020 At Current Consumption Rates, Modelling Shows 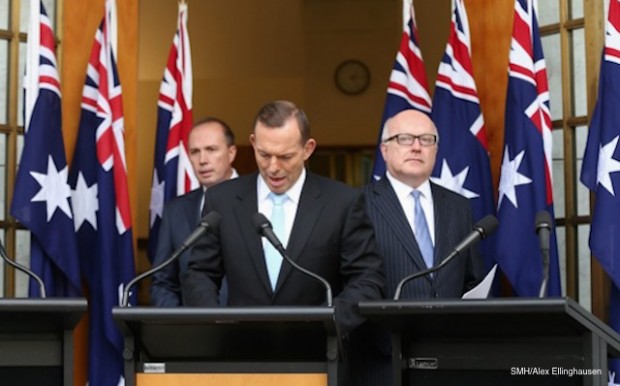 The Federal Government today announced a $2.2 billion boost in funding for the flag industry, after analysis revealed Australia could run out of flags entirely within five years if consumption continues at its current rate.

Announcing the new spending measures this morning, Prime Minister Tony Abbott said it was a critical investment in Australia’s future.

“While it might be hard to imagine now, by 2020 it is predicted that the average media briefing will use two hundred flags. By 2030, a thousand. Even by this time next year, you can expect to see 80-90 flags behind me for a run-of-the-mill security announcement. So continued investment in the flag industry is vital. What this new funding does is secure our future for the next 30-40 years”.

Mr Abbott said the rise of terrorist groups such as ISIS, and challenging poll numbers, meant Australia’s flag consumption habits were changing. “We need to protect our borders; we need to protect our citizens. And the best way to do that is with lots and lots of big flags,” he said.

Meanwhile, a spokesperson revealed that the Government has already started to ration its use of flags in anticipation of a shortfall. “Just as an example, this week’s citizenship policy announcement was supposed to be a thirty-flag event. We had to cut it back to ten. We got away with that one, but if there’s an unexpected drop in approval ratings, we could be left well short of the optimum number of flags required”.

The funding was rushed through Parliament today, with support from Labor.