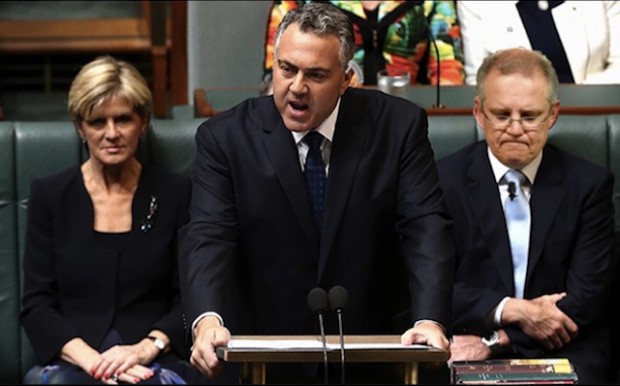 In his first budget speech last year Treasurer Joe Hockey read from typed notes. Tomorrow he will be carefully listening to, and then repeating, the words of Social Services Minister Scott Morrison, thanks to a barely-visible device attached to his ear.

It means that, in a first for Australian politics, the Treasurer will hear the content of the budget just seconds before the rest of the nation does.

“This is an exciting development. It’ll be as if I’m delivering the budget myself,” Mr Morrison said.

Morrison will dictate the speech word-for-word through a small microphone attached to his tie. The innovative set-up is the brainchild of Mr Morrison himself, who wanted to ensure that the budget was not jeopardised by external factors such as pre-budget policy leaks or Joe Hockey.

Mr Hockey said he was looking forward to hearing what spending initiatives would be announced in this year’s budget. “Like everyone else, I’ve got absolutely no idea what’s going to be in there. I’m pretty excited about it all – who knows what surprises are in store?” he said.

Meanwhile, Prime Minister Tony Abbott ruled out replacing Mr Hockey as Treasurer. “I think the system we have in place at the moment is working well. I know Joe will take full responsibility for how the budget is received this year, just as soon as he hears what’s in it”.