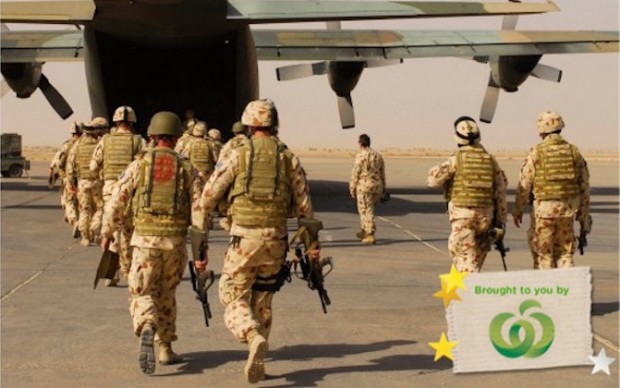 Supermarket giant Woolworths has announced a five-year sponsorship deal that will see its brand linked with Australia’s ongoing war efforts in the Middle East.

A Woolworths’ spokesperson said it was part of new strategic push to profit from the memory of dead Australian soldiers.

He said it made sense to link-in with the freshest war in the market. “The Government only just yesterday announced the delivery of more Australian troops to fight IS. And we’ll be delivering fresh apples, pears and bananas to our stores around Australia today, and every day. So as you can see, it was an obvious opportunity to ‘join forces’, so to speak!”

The Woolworths logo will appear on military uniforms and artillery, as well as during press briefings, from as early as next week.