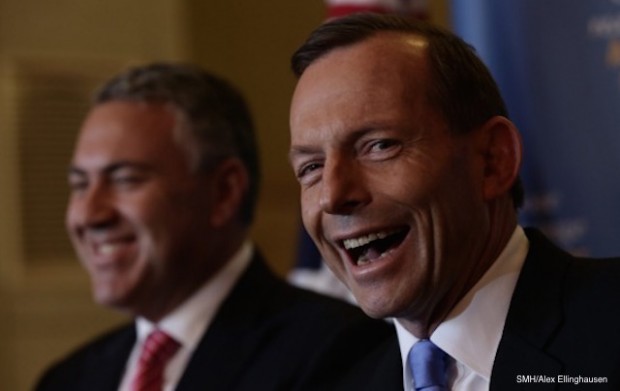 The document – distributed amongst Liberal Party colleagues – was eventually uncovered as an elaborate April Fools Day prank, cleverly crafted by Mr Abbott and Treasurer Joe Hockey over the past few weeks. But many Coalition MPs said they fell for the hilarious hoax, at least to begin with.

“I admit I fell for it initially. The cover, the design … it looks exactly like the real budget,” Finance Minister Mathias Cormann said today. “But I did become a little suspicious when I saw that the biggest burden of spending changes fell on those who can most afford it. That’s when I realised something wasn’t quite right!”

Attorney General George Brandis said he also fell for the clever gag. “Hook, line and sinker. We were sh*tting ourselves in my office. I said to my staff, ‘How are we going to sell this to big business? What are they going to say if we ask them to pay a reasonable rate of tax?’ I was a little panicked, I’ll admit!”

However one backbencher, who did not wish to be named, said he picked it as a fake straight away. “Not a single broken election promise? Come on, it was a bit obvious”.

Earlier, Mr Hockey and Mr Abbott arrived at Parliament House, carrying boxes of the newly-printed budget documents, trying to conceal their smirks. “It was hard to keep it a secret, but it was worth it for the reactions we got,” Mr Hockey said.

Meanwhile, Education Minister Christopher Pyne played a practical joke of his own, putting a stink bomb in the female toilets at Parliament House. Although sources say he does that most Wednesdays.