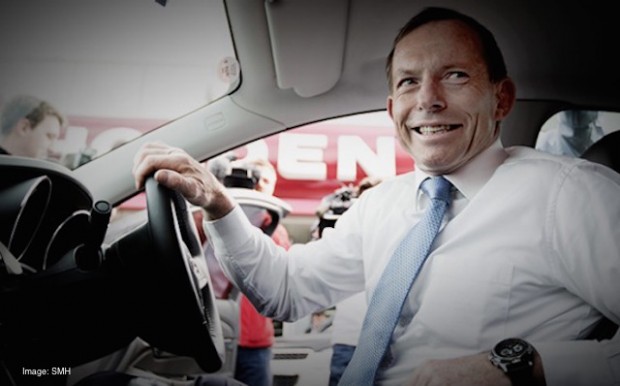 The Australian Prime Minister is the new host of the BBC’s much-loved motoring program Top Gear.

The show’s producers said the suspended Jeremy Clarkson would be a hard act to follow, but they believed Tony Abbott was up to the task.

“We were a bit worried there for a while [about finding a suitable replacement]. I didn’t think there was anyone else who could pivot so effortlessly from a sexual stereotype to a Nazi reference in order to make a point. Then someone told me about Tony Abbott,” one of the show’s producers explained.

“His show reel of recent work was very, very strong. But his public persona was on the money too. We wanted someone who, like Jeremy, loves a scrap, who isn’t afraid of saying something a little bit weird in order to draw some publicity, who doesn’t back away from an old-fashioned punch-up if something’s not going his way. Big tick there,” he said.

“Abbott’s perfect,” one BBC insider said. “Using racially-charged innuendo to boost the ratings isn’t as easy as it looks. If I’m honest, I think Clarkson may struggle to get a place back on the show”.

Mr Abbott will join James May and Richard Hammond from next week.