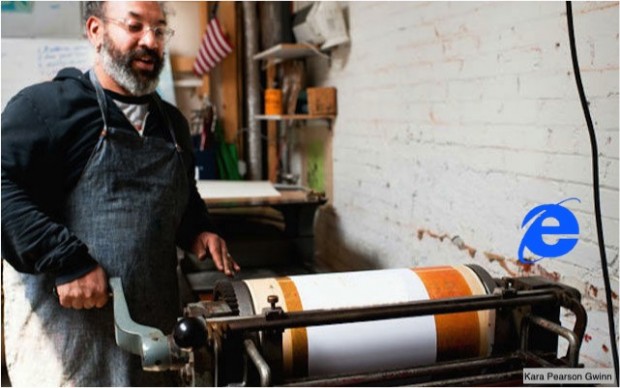 Ed Cornigen will wake up at 4:08am on Friday morning, as he’s done for the past 20 years, to wind up Internet Explorer for one last time.

Microsoft has announced plans to phase out its famed internet browser, as it moves to a new, more modern, automated version later this year. Cornigen’s services won’t be required.

Cornigen – 66 – first started ‘turning the cogs’ for Explorer in 1995, and he’s been the driving force, quite literally, behind the browser’s success every day since.

“Every time you type in a website url in the address bar, I’m the guy behind the scenes, turning the wheels, making sure the page loads as quickly as possible, usually in less than ten minutes,” Cornigen said.

“It’s hard work; you definitely work up a sweat. You know you’ve done a day’s work come 5pm,” he says, adding “These days people seem scared off from hard work. They want everything on a platter”.

Cornigen lists amongst his favourite memories loading Alta Vista search pages in the late nineties – “such a joy”. His hardest, loading a video for a user in Europe once – “I almost busted a blood vessel”.

Ed’s redundancy is a sign of the times; another example of technology replacing people-power. But he insists he isn’t bitter. “I’ve had a good run; Microsoft has been good to me. My arms are tired, I’ve got calluses on every finger. I’m ready to call it a day”.

Microsoft has booked a small room at a bar near its Washington headquarters for Friday night, to mark the end of this chapter of its history. All Internet Explorer users are invited to attend.