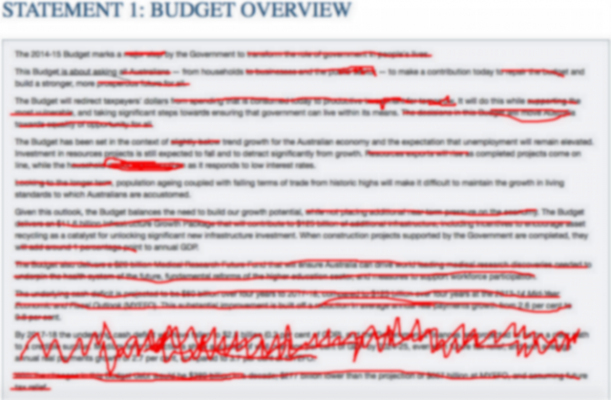 The updated version of the 2014-15 Federal Budget fits on half a page.

Treasurer Joe Hockey released the amended document today, which no longer includes the policies that have been scrapped since the budget was first announced.

“There’s a title, a bit of a preamble about the role of budgets, and then a couple of footnotes,” Mr Hockey explained. “Actually, most of the footnotes can probably go, come to think of it”.

He said his office staff had been making amendments over the past nine months using the ‘track changes’ function on Microsoft Word. “There were a lot of crossed out bits in red. I just pressed ‘accept all changes’ and all of a sudden the document went from being 245-pages to a couple of lines,” he said.

Mr Hockey said he was going to email the updated budget papers to business journalists, but decided to put it in a text message instead.