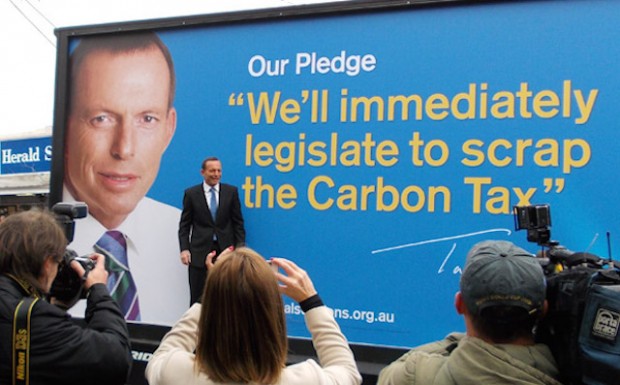 Eager to stamp his authority and set a clear direction for his Government after the recent leadership scare, Prime Minister Tony Abbott today outlined plans to abolish the carbon tax again.

“The Australian people gave us a mandate to scrap this toxic tax, and we’ll continue to keep scrapping it,” Mr Abbott said. “That’s what we were elected to do, and that’s what we intend to keep doing.

“If you look to our strong record of achievement over the first 18 months, you’ll see we scrapped the tax, and stopped the boats. We plan to repeat those successes in the second half of our term.

“This is about easing the burden on households and stopping the python squeeze on our economy,” Mr Abbott said.

One Liberal MP said it was reassuring to see the PM had rediscovered his mojo. “I think he’s found a cause he can really get behind”.

Mr Abbott bristled at suggestions that Government had run out of new ideas. “Getting rid of a tax that’s already been abolished is certainly a new idea,” he said.