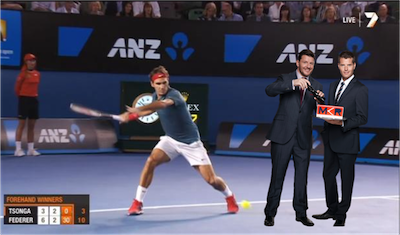 An extended promotion for one of Australia’s favourite TV shows, My Kitchen Rules, was constantly interrupted by a game of tennis last night, leading to an angry response from some fans.

It is believed the advertisement, which ran from 7pm until the early hours of this morning, was stopped as many as a dozen times to show snippets of the tennis.

“It totally messed up the flow of the ad,” Canberra man Barry Knowles complained. “One minute I’m getting to know the contestants for this year’s competition and then, BAM! out of nowhere, they’re talking about Roger Federer’s backhand. I mean, really? It makes it very hard to keep up with what’s going on”.

Broadcaster Bruce McAvaney said he “wasn’t 100% comfortable” talking about the tennis, but conceded it was a requirement of his contract.