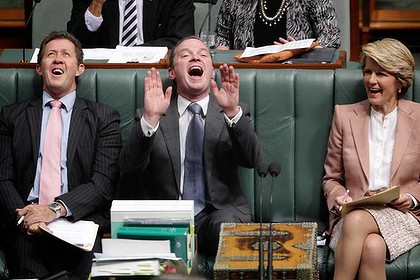 Tony Abbott this morning said that neither he, nor his colleagues, ever claimed to be adults and that any suggestions they had done were simply misquotes from sections of the media.

In a speech to the press gallery Mr Abbott said, “We never promised to be anything other than childish and petty. That was our pinkie promise and we are going to keep that promise. Not the promise that some people thought that we made, or that people like Short Change Electricity Bill Shorten wanted us to make. We are going to keep the promise that we actually made. So suffer”.

When shown footage of Liberal MPs claiming during the election campaign that the ‘adults would be in charge’ should the Coalition be elected, Mr Abbott said “well that’s just semantics and we had our fingers crossed anyway”.

The press conference was brought to a close when Education Minister Christopher Pyne ran up behind Mr Abbott and gave him a wet willy.