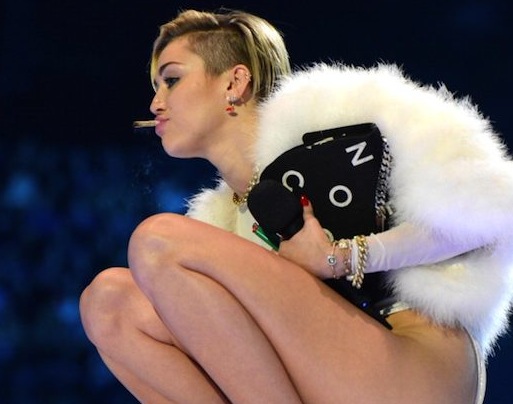 Miley Cyrus is one, maybe two, outrageous performances away from getting us to look up from what we’re doing, it was reported today.

The singer’s previous attempts to get our attention (which have included running down the hallway naked and pretending to smoke a cigarette without any pants on) have, thus far, only elicited the response “hang on a sec, honey”.

But with the constant racket looking unlikely to stop anytime soon, experts say it’s only a matter of time before we’re forced to look up and say “Wow, that’s amazing sweetie”, and then get back to preparing the dinner.

A spokesperson for the human race said the strategy was necessary, but wasn’t without its hazards. “There’s always the risk that by feigning interest we’ll only encourage her to do even more ridiculous stuff – handstands in front of the TV, bouncing on the trampoline in mum’s high heels, that kind of thing. But hopefully she’ll get bored. God knows we are”.