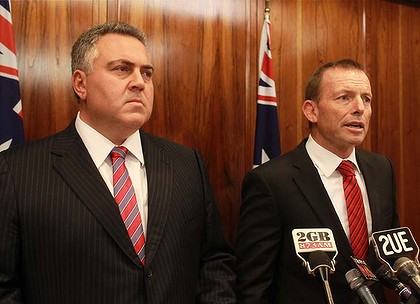 Coalition MPs were locked in crises talks this morning after it became apparent they had run out of ways to make the state of the Australian economy sound any worse.

After two and a half hours of deliberation, Shadow Treasurer Joe Hockey emerged saying the party had considered all options, but in the end had decided to invent a range of new terms. He said the new terms will enable MPs to adequately describe worsening economic conditions, should they occur.

“I think you’ll like what we’ve come up with,” Mr Hockey said.

“This is a budget topnopple.

“Unemployment is at hootingbrand levels”.

Mr Hockey said that not everyone in the party room initially agreed with the new direction. “Tony wanted to say ‘unemployment is ginormous’ or ‘this is a really, really, really big budget emergency’. But we managed to convince him that that might sound a bit childish”.