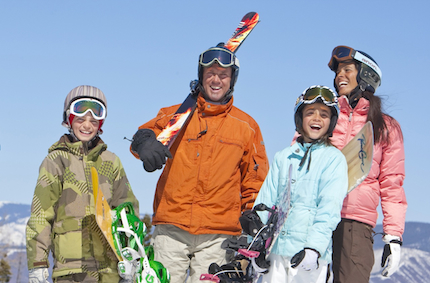 The Joneses in happier times, on last year's Aspen holiday.

In a sign of just how tough life on Struggle Street has become, the Jones family of Sydney today announced to family and friends that their Christmas holiday to Aspen had been scrapped. The Joneses earn just $250,000 a year.

Father of two Robert Jones said with the rising cost of necessities such as Foxtel and organic coffee, the family was forced to abandon the trip. “I can hardly afford to pay someone else to put food on our table anymore,” he said.

Mr Jones said his children were devastated. “It was something small to look forward to in what is otherwise a pretty tough life. Our last trip was in January; that seems like an age ago, especially for young kids”.

Labor MP Joel Fitzgibbon said he felt for the Joneses. “I’ve been there. Not being able to look your kids in the eye when you tell them that you can’t even afford to pay for their private ski lessons anymore, let alone a trip to the slopes. It’s the shame more than anything else”.

Mr Fitzgibbon said he would approach the Salvation Army on the family’s behalf to see what help, if any, could be offered.