CLOSE
The Nation
Gillard outsmarts Abbott by having a baby 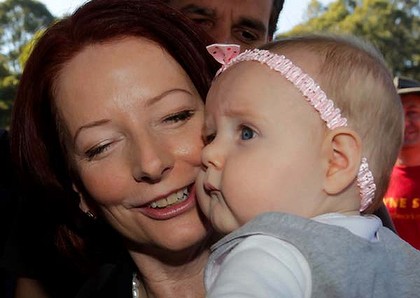 Prime Minister Julia Gillard gave birth to a baby girl this morning in a decisive move designed to put an end to accusations that she is out of touch with Australian families.

In a statement released earlier today Ms Gillard said: “The whole issue was becoming somewhat of a distraction which, frankly, Australia doesn’t need right now. It’s time to draw a line under this subject now and move forward with running the country”.

Opposition Leader Tony Abbott, whose comments about the baby bonus yesterday were seen by many as a swipe at the Prime Minster, was blindsided by the crafty political manoeuvre. “When Joe Hockey told me this morning Julia was in Labor, I said ‘yeah no der!’ Now I know what he meant,” Mr Abbott said.