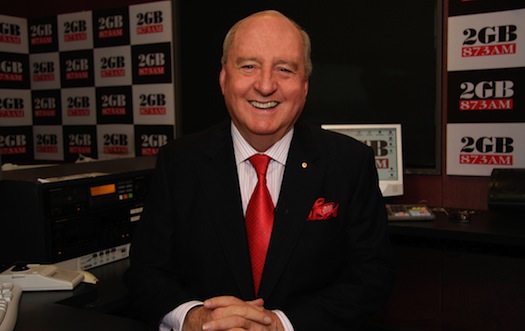 Broadcaster Alan Jones has started the search for an employee to check the accuracy of his on-air statements after yesterday’s ruling by the Australian Communications & Media Authority that ordered 2GB to use a fact-checker. Mr Jones today released a quiz that prospective candidates for the role will be asked to complete as part of the recruitment process. The quiz is reproduced below.

Please answer each question as accurately as possible.

a)    The increase in the temperature of the earth’s atmosphere

c)     A hoax cooked up by the Gillard Government that, let’s be clear about this, has one goal and one goal only: to take possession of your house and kidnap your children

2. The statement “we should put the Prime Minister in a Chaff Bag and throw her out to sea” is:

a)    A little bit childish

b)    How Albanians pronounce the seventh calendar month

c)     A clever alternative name for our Prime Minister (if you haven’t worked it out yet, it combines the word ‘Julia’ with ‘liar’)

5. The definition of a bully is:

b)    A rare breed of dog found in southern Italy

c)     It can either mean ‘robust debate’ or ‘a vicious campaign to drive advertisers away from my radio program’. It depends on who is being accused of bullying

b)    A song by The Village People

c)     A spy organisation set up by Bob Brown, and funded by the taxpayer, to eavesdrop on the private conversations of my listeners, without their consent

a)    A character from the Harry Potter series

a)    A regretful acknowledgement of an offence or failure

Mainly a’s: Please don’t waste any more of my time. You probably think your elitist view of the world is somehow trendy or clever, but it’s actually just wrong. I’m organising a chaff bag for you as I write.

Mainly b’s: Thanks for your interest in the role. We received a lot of applications and unfortunately you missed out this time. Be sure to tune in from 5:30am each weekday.

Mainly c’s: Toilets are down the hall to the left; help yourself to coffee or tea. Welcome aboard.