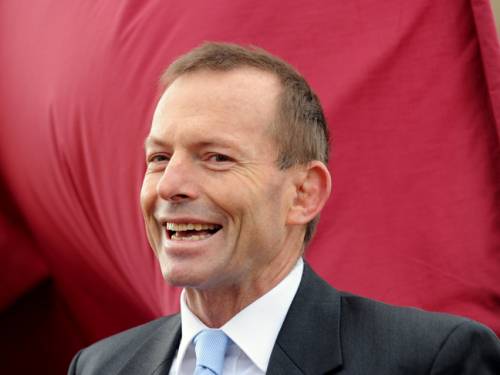 Australia’s caring-and-sensitive Opposition Leader – who we now know prefers Downton Abbey to the footy and cries when watching The Year My Voice Broke – today announced a change to his long-held policy of towing back boats of asylum seekers to Asia. In an emotional press conference this afternoon he said that, on reflection, the policy was unnecessarily harsh; what boat people really needed was a big hug.

“What we need is hugs, not tugs,” Mr Abbott said, adding that if he was to win Government, all asylum seekers would be welcomed at the border with an ‘army of huggers’. “I’ll be there, at the front of the line. I urge other Australians to join me”.

In the forty minute press conference Mr Abbott gave further insight into his softer side. He said he often cried himself to sleep thinking about the abuse that passed as debate in Parliament; he also showed reporters the fluffy toy he takes in with him to Question Time.

At the time of publication The Real Julia was unavailable to comment on Sensitive Tony’s new policy.