CLOSE
The Nation
Alan Jones puts forward suggestions on how to fill airtime, now that his show has no advertisers 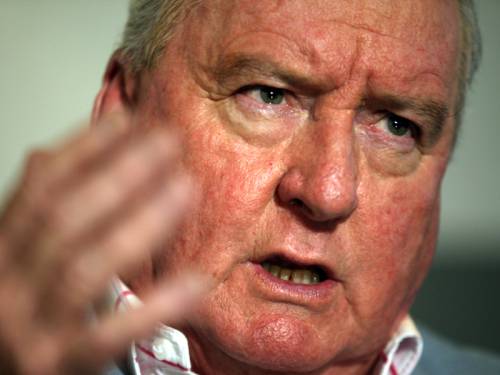 With sponsors of Alan Jones’s 2GB breakfast program abandoning the show en-masse this week, the Sydney broadcaster has been left with a lot of empty airtime on his daily show. Never one to be perturbed by temporary setbacks, Jones has put together a range of alternative segments to fill the space. Here are some of the proposed new segments, as explained by Jones in his pitch to 2GB executives today.

Alan Jones’s Weekly Apology: I can’t for the life of me see why people get offended when I call them ‘vermin’ or abuse their dead parents or suggest they drown in a chaff bag – I grew up around chaff bags … perfectly useful, practical things, as any hard working Australian would appreciate. But if the do-gooders and latte-sipping city folk feel comforted by my half-baked apologies or, in the case of the NSW Administrative Decisions Tribunal, legally demand them, then I may as well get on the front foot and apologise before the shit-storm hits. I’ll use ten minutes a day for apologies; my secretary is writing an apology template as we speak.

Alan Jones’s Science Segment: Time and again my listeners tell me that when it comes to science, they want a different opinion from what is forced on them by the intellectual elite. The so-called research done by the mainstream scientists around the world just doesn’t fit with many of my listener’s desired view of the world. That’s where I can fill the gap. My no-nonsense, common-sense explanations of science are based on over forty years as a broadcaster, English teacher and rugby coach. I coached the Wallabies you know, which is a lot more than Tim Flannery can say.

Alan Jones’s View: All we hear these days is what Julia Gillard or Wayne Swan or some smart-arse university student Twitterer thinks about the world. I hope it’s not too much to ask to have my voice heard once in a while. I’ll use this segment to humbly put forward some of my opinions and then open up the phone lines for people to agree with me.

Your Riot Requests: This segment is quite simple: listeners will send me short promotions for the riot they’re organising (including where, when and which ethnic minority will be vilified) and I’ll read them out verbatim. Not that I endorse people taking the law into their own hands, of course.