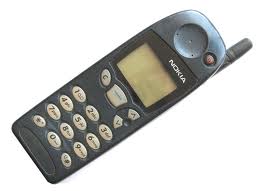 While Apple was celebrating the launch of its new iPhone yesterday, the once popular mobile phone company Nokia was having a party of its own. The 1998-themed event was the brainchild of Nokia CEO Stephen Elop who wanted to recreate the feeling of market domination. “I envisage a time when everyone has a Nokia phone and the iPhone is non-existent,” Elop said, “That time is 1998”.

Staff came dressed as their favourite 1990s handsets, played a round-robin Snake tournament and danced the night away to Chumbawamba. But the highlight of the evening was when Elop performed a mock Steve Jobs-style product launch of the Nokia 5110, to over-exaggerated ‘oohs’ and ‘aahs’.

The party was generally well received by Nokia staff. “It was a great event, with a really intuitive layout,” said Adrian Eeeves, who works in Nokia’s user-interface team. “I found it really easy to get from the dance floor to the bar and then back to the dance floor again. It’s just a pity that the music was played in mono”.