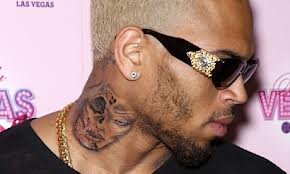 Controversial American singer Chris Brown has been seen in a Los Angeles nightclub showing off his latest tattoo – a forehead piece which looks eerily like the word ‘LOSER’ . This comes after the star was criticised for his neck tattoo which resembles the bloodied and bruised image of Rihanna, the ex-girlfriend he brutally bashed.

But Brown insists the new marking does not say ‘LOSER’ – at least not when he looks at it in the mirror – but rather ‘RESOL’, the name of a German solar thermal heating company.

This morning he tweeted “I’m an environmentalist, and thermal control technology is important”.