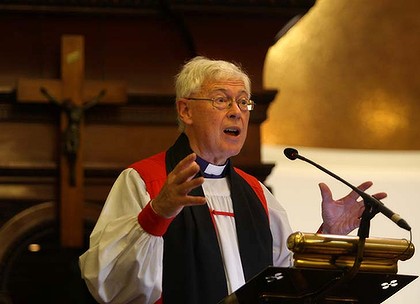 Last night on the ABC’s Q&A program, Sydney Archbishop Peter Jensen backed claims by the Australian Christian Lobby that leading a homosexual lifestyle may be more dangerous to a person’s health than smoking. This morning he went a step further by suggesting that the recent plain packaging laws for cigarettes be extended to homosexuals as well.

Under the proposal, all homosexuals would be forced to wear a drab olive green sack when out in public. “It just makes sense,” Mr Jensen said this morning. “People wearing a green sack will be less attractive to other homosexuals, so it will make it much easier for them to quit their nasty habit. It will put the whole issue to bed, mind the pun!”

Mr Jensen said he would investigate whether other groups within the community that have proven shorter average lifespans –Aborigines and males amongst them – should also be subject to the draconian laws.

The Archbishop said he hoped his idea would be implemented as soon as possible and bring some decency back to public attire. “The way homosexuals dress is just too provocative. If these young men want to continue to get frocked up in fancy colourful outfits, well, they’ll just have to join the priesthood”.