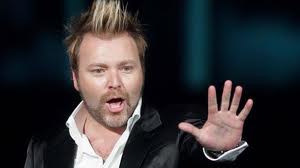 (image from The Punch)

Sandilands claims using a patch – which covers his entire mouth – has helped him in his attempts to quit, but said breaking the addiction had been harder than he expected. “Last year I was going through twenty to twenty five sexist comments a day. Whenever I tried to quit it only lasted a few days before some fat bitch would wind me up and … oh, fuck it. Back to square one”.