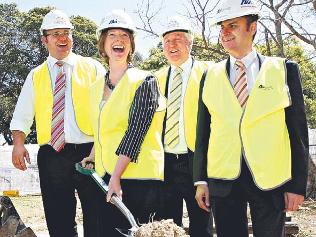 Prime Minister Julia Gillard announced today that she will be a contestant on the 2013 version of the hit renovation program The Block. In a marathon press conference to promote the show, Ms Gillard said she’d always had a passion for renovating.

“I think if you look back at how I project managed the renovation on my place in Abbotsford, it’s pretty clear I’ve got a natural flair for home improvements,” she said. Asked to elaborate, she said simply “Let’s just say I know a shit fence when I see one”.

Ms Gillard said viewers could expect to see a sleek, streamlined ‘Swedish-style’ design, which she preferred to the more decorative approach common in southern Europe.

Filming for the show will start just after next year’s election which Ms Gillard said was ‘perfect timing’. “I’ll be able to devote my full attention to the show”.