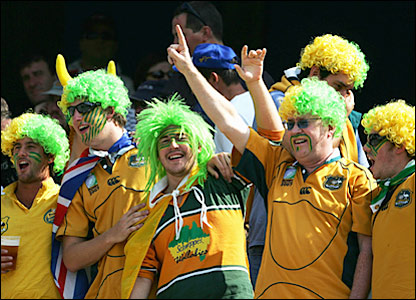 Guests at the award ceremony

ASCA President Charlie Arnold praised the chant for its “creativity, ingenuity and lyrical brilliance”. The famous mantra, which is known by sports fans across Australia and around the globe, was penned by tennis fan Dennis Freeman in the early 1990s.

On accepting the award, Freeman said “I’m speechless … I mean, I literally haven’t got a speech prepared”.

The crowd – a who’s who of the sporting chant industry – gave Freeman a standing ovation and clapped in a regular, rhythmic pattern.

At the awards after party Freeman revealed that the composition was the result of years of work. He said he wrote the tune first, with the lyrics coming much later. He also let slip that the original version of the song actually contained three words, but he later cut it down to two after market testing revealed it was too complex. He wouldn’t be drawn on what the third word was. That, no doubt, will be the subject of heated conjecture for generations to come.