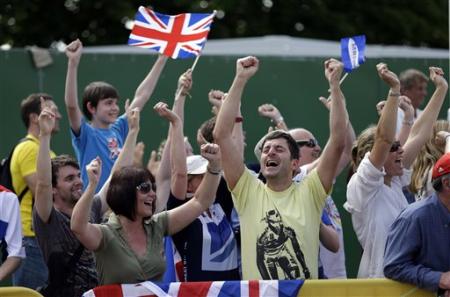 GPs and hospitals around Britain have been inundated with calls from concerned residents who say they are experiencing ‘contentment’, ‘joy’ and, in one case, even ‘elation’ after watching sporting contests. Experts say the reported symptoms suggest there may have been an outbreak of ‘winning’ in the country.

Although common in other countries, ‘winning’ was largely wiped out in Britain at the turn of the last century. But it appears the phenomenon has been re-introduced, possibly with the influx of visitors for the Olympics.

Terry Booth from London is typical of those who has suffered from the alarming phenomenon. “I went to watch Andy Murray play in the tennis final and was looking forward to a bit of mild depression after another heart-breaking loss. But when he won I was filled with this strange sense of satisfaction and, dare I say it, happiness. I’ve never felt that before after watching sport, so I called my doctor immediately”.

Football fan John Best from Sheffield says he usually goes out to smash windows after English football matches and was totally underprepared for Great Britain winning the dressage gold. “I actually hugged a stranger in the street, which is a little disturbing,” he says, adding “I don’t even like dressage”.

Amanda Bigley from the National Health Service has told Britons not to panic. “We’re all in unfamiliar territory here. Yes, it’s a very, very strange feeling, but I’m confident we can overcome it. In Australia, for example, they’ve recently gone a long way to eradicating winning”.