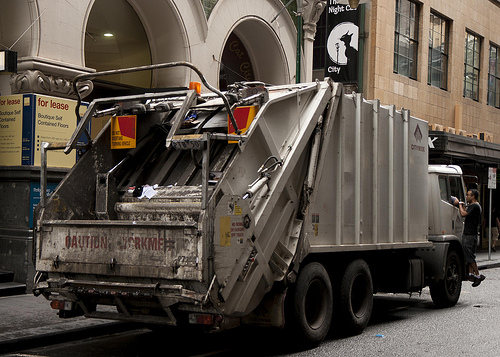 It’s what Melbourne is famous for. Quirky cafes and bars tucked away in the most unlikely of places – down dark laneways, underneath methadone clinics and in hard-to-track-down roaming vans. Now Melbourne man Troy Taylor has opened the ultimate new concept bar – in the back of a rubbish truck – and it has the whole city talking.

Taylor says the inspiration for the bar came from a friend. “A mate of mine works as a garbo when he’s not doing high-concept performance art. One day he was talking about how much interesting stuff there is inside a rubbish truck and that’s when the light bulb went off. It just screamed ‘intimate bar space’.”

Two weeks later “Barbage” was born. Taylor drives an off-duty rubbish truck to different locations each night of the week serving hard-to-find craft beers and light snacks in the back. Fans are tipped off as to the truck’s location via Twitter and then wait patiently on the side of the road to be picked up.

“We wanted to use the hydraulic arm to literally drop people into the bar, but the council had some OH&S concerns with that. So instead people just jump in the back themselves. The crushing machine thing is usually turned off so it’s totally safe”.

Punters admit that the bar can be a bit smelly but say that’s part of the appeal. “If I wanted to go to a clean pub with proper seats I’d go to Sydney,” said Josie, a Barbage devotee.

But Joel, who has also been to Barbage several times, says the concept has had its day. “It’s over man. It was cool in April but too many people know about now. Your story on it is going to fuck it up even more”.

Emma, a tourist from Sydney said she thought the bar sounded rubbish.