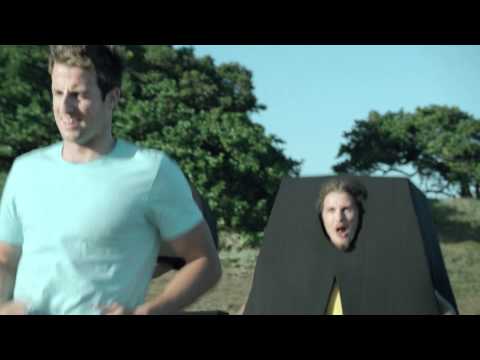 The Commonwealth Bank has come forward this morning taking full responsibility for Australia’s shock loss in the 4 x 100 men’s freestyle relay, saying its silly CANT ads are to blame. Australia were unbackable favourites to win the race this morning (Australian time) but instead came fourth in one of the biggest Olympic upsets in recent memory.

Brody Cootes, a spokesman for the company, said that the ‘T’ in the CANT ads was just too convincing. “The actor we got to play the ‘T’ was, if I’m honest, just too good. He was just a very, very persuasive guy. He even convinced me to air this ridiculous ad when I had strong doubts. He said to me ‘you can’t go wrong’. We never should’ve cast him”.

In the ad, the charismatic ‘T’ tells Australian swimming sensation James Magnussen that “Anything could happen” and cheekily calls the swimmer the ‘Hit and Missile” – a play on his popular nickname ‘The Missile’. It appears his convincing performance created self-doubt which then spread through the whole relay team.

Banking industry observer Jodie Adams said the ‘T’ hasn’t just convinced James Magnussen that nothing is possible, the general public is convinced as well. “People are telling me ‘I can’t get through to their call centre’, ‘I can’t see why I get charged such high fees’, ‘I can’t get a decent interest rate’. This ‘T’ guy really is creating havoc. He’s the one that should be called The Missile!”.

Advertising guru Hugh Walker said the ‘T’s performance in the ad was ‘stunning’. “He just totally overshadowed the ‘C’, the ‘A’ and the ‘N’”.

In a statement released this morning, the ‘T’ said “Whenever you think you can achieve something, you’re probably wrong”. The ‘C’, ‘A’ and ‘N’ were trying to distance themselves from the T. No apostrophe could be found for comment.