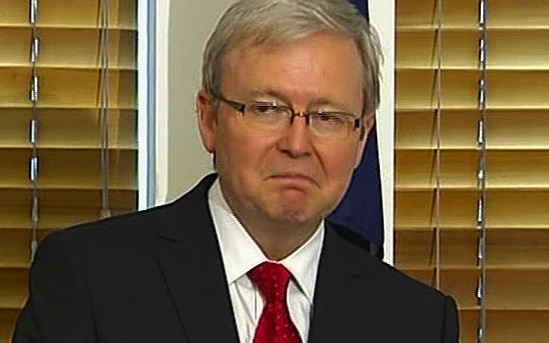 Against the best advice of child discipline experts, Prime Minister Julia Gillard has refused to put a deadline on how long she will make Kevin Rudd stand in a specially allocated corner in her Canberra office.

Mr Rudd was told to stand in the corner five months ago today, following his decision to challenge Ms Gillard for the Labor leadership. He hasn’t been heard from since. Labor sources say the former Prime Minister did try to sneak out once to brief the media but was caught in the hallway and promptly sent back.

Ms Gillard says it has been difficult having Mr Rudd in her office but that it was important for him to learn his lesson. “At first he cried a lot – it actually got quite unbearable. But then we set him up with a DVD with his 2007 victory speech on loop and he’s been pretty good since then”.

Child discipline expert Jo ‘The Nanny’ Frost said it was important that parents and carers were clear about how long their children would spend in The Naughty Corner. “Generally my advice is one minute for each instance they’ve been annoying – so for Kevin Rudd I’d say four to five years would be sufficient. However Ms Gillard should communicate that deadline with him”.

But The Prime Minister said she preferred to keep Mr Rudd guessing. “It’s fun to watch him get his hopes up. And anyway, I’m not particularly good with promises,” she said. Asked whether she thought Mr Rudd might try to challenge her again Ms Gillard said “I’ve nailed one of his feet to the floor, so that seems unlikely”.