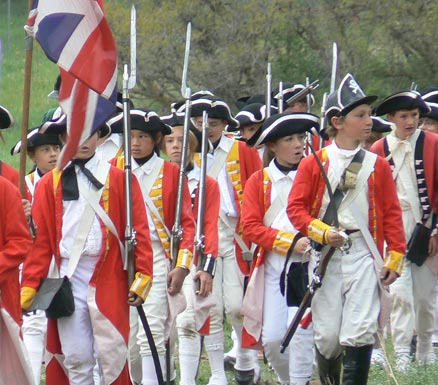 In Sydney it was giant thongs and Kylie Minogue, in Athens Greek Gods flying above the stadium and in Beijing a mass martial arts demonstration. The Olympics opening ceremony has always been a chance for the host nation to show off its culture and educate the world about its historic achievements. So it’s perhaps no surprise that London will use the opening ceremony as a showcase for the nation’s rich back catalogue of colonisation, occupation and invasion.

Lord Matthews, head of the Committee for Organising the Opening Ceremony (COOC) said there would be tasteful re-enactments of past invasions, from the earliest English conquests of Scotland right through to Britain’s involvement in the Iraq war in 2003. “I’m particularly looking forward to seeing the occupation of India; one of my absolute favourites,” he said.

A highlight will be when four thousand school children from around Britain assemble together in the main stadium to form a giant image of the smallpox virus. “It’s going to be an absolute killer, pardon the pun!” Lord Matthews joked.

Lord Matthews said the ceremony was a reflection of the values of the Olympic tradition. “The Olympics is about inclusion, fairness and equality. But it’s also about being the fastest, the strongest and the most powerful. For centuries that unquestionably was Britain”.

But not everyone in Britain is happy with the opening ceremony plans, with many critics saying colonialism is in the past and doesn’t represent the country’s values today. Lord Matthews isn’t phased by the backlash. “I don’t buy into that sort of negativity. Sure, we’ve lost India and America and Hong Kong, but we’ve still got Australia. Let’s focus on the positives”.