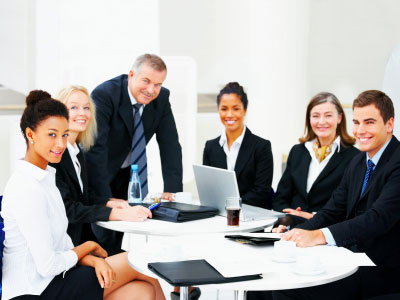 The meeting, moments before the offensive word was used

Employees at a city accountancy firm are still reeling after one of the senior partners allegedly used the word ‘funky’ in meeting with important clients yesterday.

The partner, who did not wish to be named, said he wanted to create a ‘relaxed, creative vibe’ in the meeting and was under the impression that it was still appropriate to use the term. But it turns out the word hasn’t been used in respectable company since 1999.

It is believed the partner used the five-letter word to describe the briefcase one of the client representatives – John Bellstone – was carrying. Red-faced fellow employees went into immediate damage control. One junior executive attempted to cover-up the faux-pas by claiming her boss had actually said ‘chunky’. But Bellstone was unconvinced. “I know what I heard,” he fumed when contacted yesterday “I thought we’d moved on from that kind of language in the workplace; clearly I was wrong. We won’t be doing business there again”.

The partner apologised for his foul language this morning, saying he was deeply sorry at the offense he had caused and for letting down his friends and family. “I hope in time I can be forgiven and that everything will be cool b**anas again,” he said.