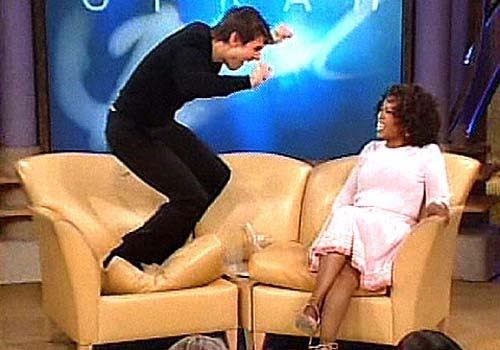 It was one of the defining television moments of the last decade. Tom Cruise, with a new film about to come out and a new girlfriend to promote, appeared on The Oprah Winfrey Show and went slightly crazy.

It became known as the ‘couch-jumping’ moment: Cruise declared his love for Katie Holmes in a fist-pumping, borderline-psychotic, should-we-call-the-cops outpouring of emotion.

But it is now clear that the tan leather couch on the Oprah Winfrey set was what Cruise was really excited about that day. Today, just three days after Holmes announced the couple’s separation, Cruise revealed he will marry the couch in an tasteful Scientology ceremony next month.

In a short statement, the Endless Love star said simply “Some people find spare change down the back of their couch. I found love”.

Insiders say the affair between Cruise and the couch was Hollywood’s worst kept secret. “The way Tom sat in that couch on the Oprah show, he just looked so comfortable and at ease” said Hollywood gossip reporter Cindy Bracks “He never looked comfortable at all with Katie. Or Nicole. Or Penelope. Or Mimi”.

The card Tom Cruise sent to Oprah after the famous interview

Oprah Winfrey has given her blessing for the marriage, saying “She’s all grown up now!” adding, strangely “Getting my lifelong weight struggle under control has come from a process of treating myself as well as I treat others in every way”.

It is unknown whether the couch and the All the Right Moves star will have children. They are now looking for a suitable talk show to publically lose their shit on.