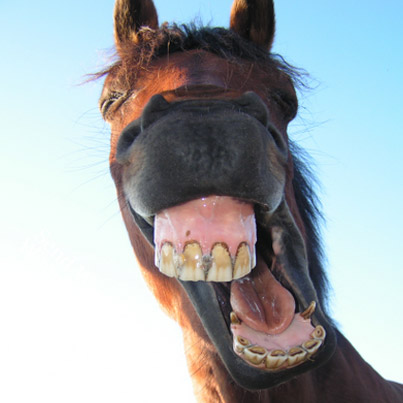 Witnesses say the famous mare had been drinking with trainer Peter Moody for some time before the connections of rival horse Moonlight Cloud arrived at the premises. Black Caviar is alleged to have shouted “How many group one races have you guys won?”. Moonlight Cloud’s trainer responded by saying that Black Caviar looked like Sex and The City actress Sarah Jessica Parker.

On hearing the comment, Caviar allegedly went into a rage, breaking glasses, kicking and biting other patrons and shouting “Do you know who I am?”

One regular at the nightclub – which counts Madonna and Prince Harry amongst its guests – said she’d never seen anything like it. “I’ve seen plenty of famous people in this place lose their sh*t before, there’s prima donna behaviour here every weekend. But nothing like this”. Another witness to the ruckus said “The fame’s definitely gone to her head. Wanker”.

The calm before the storm

But a spokesman for the horse said she was just letting her mane down after a hectic schedule of media and racing commitments adding, “although you’ve got to admit the Sarah Jessica Parker comment was below the belt”.

Many Australians who had travelled to London to watch the historic race were devastated. “When my husband said let’s go to London for black caviar, I thought we were going to a Michelin-starred restaurant,” said Brisbane resident Margaret Grint. “Instead, we’ve come all this way to watch a bloody horse race. I can’t tell you how underwhelming that is”.

Insiders say the real cause of Black Caviar’s dark mood may have had more to do with rumours that a celebrity website is planning on releasing a sex tape of the famous mare. “She’s pretty worried about it,” said one source close to Caviar. “This is no Paris Hilton romp. Have you seen two horses having sex? It’s not pretty.”

Black Caviar is the most internationally famous Australian animal since Russell Crowe and has sold over 10 million albums worldwide.