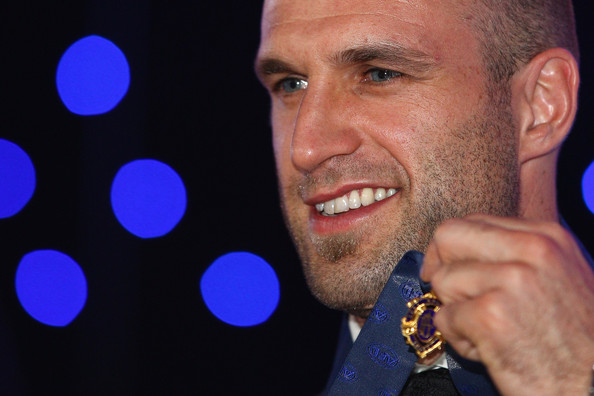 Sources close to Carlton Football Club captain Chris Judd have revealed today that the star midfielder is struggling to cope with balancing his increased workload as ambassador for paper recycling and packaging giant Visy Industries, while still trying to concentrate on the task of captaining the Blues.

The two-time Brownlow Medalist and premiership captain is reportedly disillusioned with a decision by his employer Visy Industries requesting he double his workload in 2012 and attend two social functions for the year. “It’s quite a demanding schedule now,” an anonymous source close to Judd said. “People think he just turns up and takes home an enormous appearance fee but it’s not that easy. Sometimes Chris will be at these events for up to two hours”.

News of Judd’s increased workload with Visy has come as a shock to many journalists who had believed that his position as ambassador at the company was merely a thinly-veiled disguise aimed at avoiding AFL salary-cap regulations and enabling the Blues’ to pay Judd an extra $200,000 per year. However friends of the 28 year old denied that this was ever the case. “Juddy has always been heavily involved in all of the key decisions within the company. Just the other day he was saying he came up with the idea of making all of the company’s cardboard packaging blue, the same colour as the Carlton jumper. The guys thought that was a great idea and said they would look into it for him really soon”.

Many within the company have suggested that Richard Pratt, the former Carlton president and chairman of Visy Industries who passed away in 2009 would be appalled with the current treatment of Judd, the last player in the AFL allowed to take on secondary payments from club sponsors before new regulations were introduced, were he still alive. “Dick wouldn’t stand for this” a Visy employee told reporters “He always made 100% sure we understood that Chris wasn’t to do anything of substance within the company in case it would interfere with his football schedule or completely fuck things up for us here”.

Judd’s wife Rebecca (nee Twigley) has also expressed concerns that the new workload will put extra strain on their family life. “I’m worried that Chris will barely get to spend any time with little Oscar” she told reporters outside the couple’s house this morning “Apart from the 8 hours each day Chris gets to spend at home when he’s not training, we hardly see each other”.

Despite the excessive workload the Blues champion is expected to be back in action for Carton next weekend as the Blues continue to strive to make an example of anyone who placed them as premiership favourites before the season.