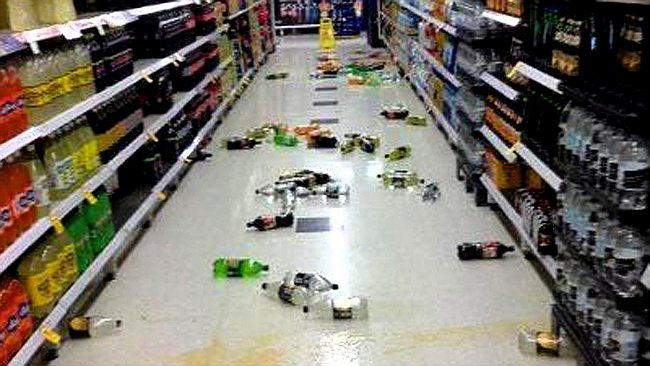 Australian Prime Minister Julia Gillard has cut short her meeting with world leaders at the G20 Summit in Mexico to visit those hit by last night’s devastating Victorian Earthquake.

The quake, which reached a magnitude of 5.3, caused widespread damage across Victoria with drinks being spilled and cans falling off supermarket shelves. One man, who was unlucky enough to be standing on a ladder at the time, fell off.

The insurance bill is expected to reach into the tens of dollars. In the Moe pub alone, one man lost two dollars when his game of pool was devastated; another had to buy a new beer, estimated to cost more than four dollars.

In a press conference, held at a Mexican airport, Ms Gillard said “The clean-up effort starts now!” Although the manager of a Warragul supermarket close to the quake’s epicentre said “We’ve already finished. I got a couple of the guys to stay back for ten minutes last night to pick up the cans and bottles”.

Gillard, who is not known for her sense of timing, insisted that she’d made the right decision to leave the high-level talks about the future of the Euro Zone. “Europe is on the verge of falling over. But I’ve just spoken to a family whose outdoor setting actually did fall over. So I think it’s clear where I’m needed most,” she said.

Meanwhile, there were rumblings at Fairfax’s Age headquarters in the Melbourne CBD, public confidence in our politicians collapsed and Australia’s Olympic preparations were looking shaky. Although none of these things had anything to do with the earthquake.