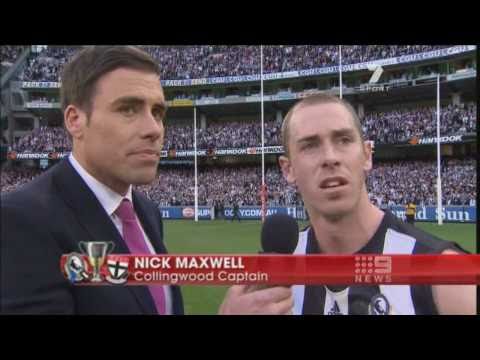 Tasmanian independent MP Andrew Wilkie today called for voluntary caps to be set on the number of clichés used by football players in pre and post-match interviews.

Under the proposal, players would be able to choose how many clichés they were willing to use in an interview before it started. Once they reached the pre-set limit the interview would automatically terminate.

“Clichés are ruining the fabric of our society,” Wilike said in a doorstop interview this morning. “My constituents have been telling me that if they hear another ‘we knew they’d come out hard, ‘we just stuck to the game plan’ or ‘full credit to the boys’ during a football telecast, they might just turn the TV off. It’s got the potential to tear families apart”.

Fellow independent politician Nick Xenophon said he supported the concept in theory, but would prefer to see a one-cliché-per-interview cap imposed, rather than mandatory pre-commitment.

AFL Players Association spokesman Phil Jacobs said the proposal was outrageous. “Clichés are a part of the make-up of footy clubs. You take that away, our whole way of life, in fact the whole economy, will go to the dogs. Wilkie needs to have a good hard look at himself. It’s a cliché, but the whole idea is un-Australian”.

Prime Minister Julia Gillard – an avid Bulldogs fan – said she would consider supporting the proposal if it extended the chances of Labor holding onto power. “What we’ll probably do is support the idea, bear the full brunt of the negativity associated with the concept, and then back away from it at the last minute”.

Jacobs said the AFL Players Association would tackle the proposal one week at a time.