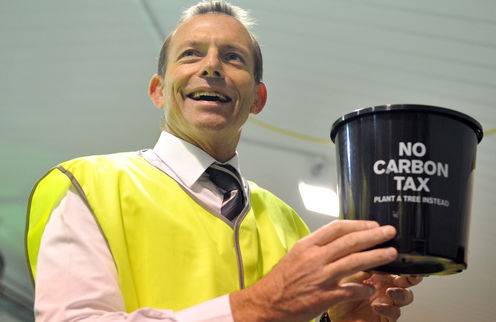 Opposition leader Tony Abbott yesterday spoke out publicly about an issue that many Australians have privately been angry about for months: the lack of decent TV shows on Tuesday nights. In a stinging attack, Mr Abbott named the Government’s carbon tax as the root cause of the dearth of quality programming.

“Look, you can’t just keep placing extra cost burdens on working families and expect there to be no consequences. The carbon tax – which Julia Gillard lied about before the last election – is a dumb tax, it’s an unnecessary tax and, frankly, it’s ruined Tuesday nights for hundreds of thousands of ordinary Australians”.

Pressed further on exactly how a tax on carbon emissions and the programming of television shows on free-to-air networks were related, the Opposition leader said “they just are”.

Sydney radio presenter Alan Jones picked up on the theme on his show this morning, saying “Shame, Julia, shame! First you increase our electricity bills, then you ruin our lives, then you lie to us about ruining our lives. Now you muck up Tuesday nights for hard-working, fair dinkum Aussie battlers. Time for another riot!”

A comment by  ‘Angry Aussie’ on a popular news website typified the reaction within the community. “Juliar’s at it again, stuffing up everything. I’ve got three kids. What am I going to do on Tuesday nights now? Election please!!!”

Prime Minister Julia Gillard said she had spoken to network bosses to try and rectify the problem, but many say it is too little, too late.