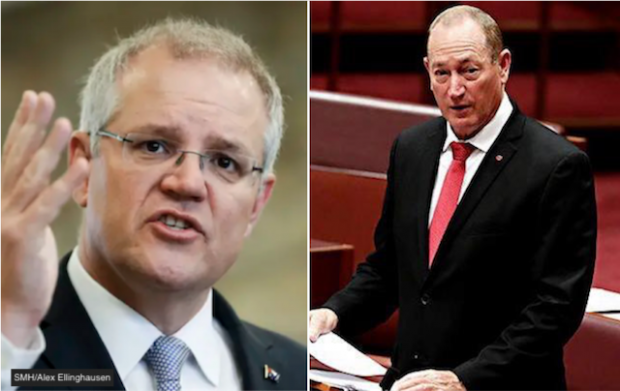 The Government has denounced Fraser Anning’s response to the recent Christchurch terrorist attack, saying it was incumbent on all politicians to at least give the impression they’re not inflaming race issues to garner votes.

Prime Minister Scott Morrison said Mr Anning’s comments were ‘disgusting’ and ‘out of step with modern Australia’, and took the opportunity to remind voters that Muslims were failing to integrate into Australian society. “His comments about Muslims – who, by the way, are the reason for a lot of the traffic problems in Sydney right now – were disgusting,” he said.

Home Affairs Minister Peter Dutton said all Australians were united in their fight against racism, and that Mr Anning’s comments had no place in Canberra, “or in Melbourne for that matter, where it’s impossible to grab a coffee these days without being accosted by a Sudanese gang”.

Mr Dutton said his and Anning’s views couldn’t be further apart. “I never once used the term ‘White Australia Policy’ when suggesting that white South Africans asylum seekers should be given preference over non-white asylum seekers, whereas Mr Anning has specifically used that term. He should be ashamed,” Dutton said.

Former Prime Minister Tony Abbott added his concerns saying, “I would advise all of my colleagues to use more measured, more respectful language when inciting race fears”.