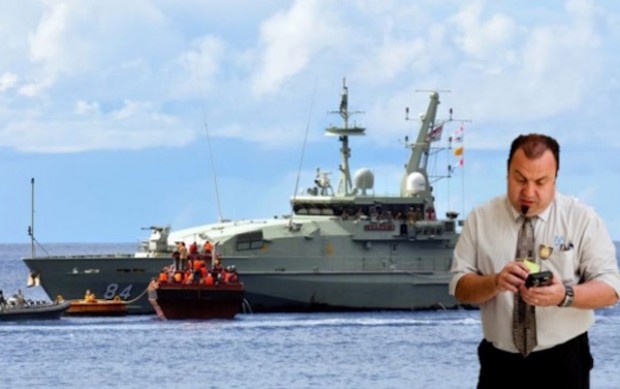 Melbourne’s train and tram inspectors will be checking to make sure those trying to enter the country have a valid travel pass this week, while their counterparts in the Australian Border Force patrol for visas at Flinders Street Station.

It’s all part of a innovative job swap scheme introduced to give officers the chance to branch out from their normal routine.

Arnold Walsh, a Pubic Transport Victoria inspector from Melbourne’s west would usually spend Monday mornings checking Myki and concession cards at the southern exit of Flinders Street Station. But today he’s 200km North of Darwin on a 60-foot patrol vessel. “It’s a new experience, that’s for sure. We’ve booked a lot of people for not having a valid ticket for today’s train travel, so it’s certainly been worthwhile,” he said.

Walsh says there are some similarities between the two beats. “We’ve heard all the usual range of excuses. ‘The ticket machine wasn’t working’. ‘I didn’t have any change on me’. ‘I’m fleeing a war zone’. But as we always say, you’ve got to touch on and touch off for every journey. No excuses”.

Back at Flinders Street, Border Force officer Kevin Hume is also keeping busy. “Thirty people stopped, thirty people without a visa,” he says, juggling an automatic weapon in one hand, and a ticket validator machine in the other.

The job swap – a joint initiative between the Australian Border Force and Public Transport Victoria – is designed to increase job satisfaction and broaden the experience of officers. Border Force officer Kevin Hume says it’s also a chance to share learnings. “I really like the set up of the ticket barriers at Flinders Street Station. That’s something I could see us roll out in the Timor”.