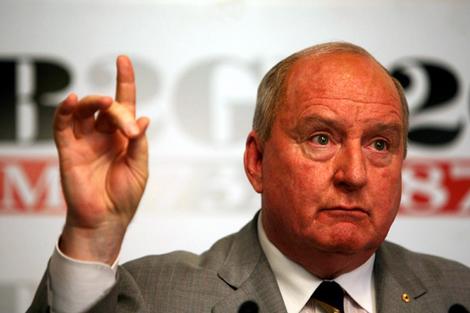 Radio journalist and respected scientist Alan Jones told his listeners on 2GB this morning that the Higgs Boson Particle – supposedly ‘discovered’ after almost fifty years of research – is just a cooked-up conspiracy from physics extremists.

Despite thousands of scientists working on the project for many years, Jones says he knows the truth and claimed the fanfare surrounding the particle was “an assault on common sense”.

A close up of Alan Jones’s tie

“Look, it’s just preposterous to claim that something could be that small – so small you can’t even see it. I’ve tried cutting a grain of salt into quarters – which would leave you bits that are still much bigger than this Boso particle – it can’t be done. Try it yourself”.

Jones says he has received “thousands” of letters from concerned listeners asking him what they should do about the Higgs Boson Particle. “I told them – and remember I spend a lot of time on correspondence – I told them just to ignore it. Pretend it doesn’t exist and it will eventually go away. There are Australian families out there struggling to put a meal on the table each night. The last thing they need is another particle you can’t even see”.

Jones will be holding a rally called “People Against Particles” in Canberra next week.